“Its OK Jerome, you can go back to your corner now… Thanks”

We have been opining for a while now on the battleground between these two market movers. In Round 1 back in July of 2018, we felt the battle between the market forces of the policies the two men were putting forth was then even-handed.  We cautioned however that it was just the beginning and that “the momentum is changing. Powell’s forces are beginning to show signs of overpowering the President’s policies.”

In Round 2 back in October, we made the case that both growth and inflation peaked in Q3, and that if Powell stayed the course, Q4 would face headwinds.   We highlighted that Powell’s use of the phrase “We may go past neutral,” was new news, and a real warning shot across the bow to risk assets. We stated, “Given the Fed’s awful track record on modeling the business cycle, growth, as well as inflation, the markets already hold their forecasts in low regard.  He stated that the Fed was a ‘long way from neutral’ which was received with eye rolls from many players like ourselves that see the business cycle slowing in rate of change terms right now as we speak.”

In Round 3 back in December, we felt Powell’s stance was completely off-based.  We ran through the data received to that date and his hardline hawkish stance was simply not justified by the numbers.  We also explained why as a firm we raised a strategic amount of cash heading into the fourth quarter. This proved fortuitous as the markets sold off in 4Q18. We expressed at year end that, “Fortunately, the selloff has created ample opportunity in the asset classes we focus on.  We have been opportunistically putting that cash to work and setting the portfolio up for a much improved 2019.” We ended up deploying most of the approximate 25% cash position across our strategies during the month of December.

Running larger than normal cash balances at times, and deploying said cash opportunistically, has been and will continue to be an active differentiator for Bramshill Investments.

At the end of the last blog post we stated, “FWIW, we should highlight the dramatic move in the Libor curve before and after the Powell press conference.  Its notably now pricing in rate cuts in 2020 and assumes Powell reverses course in fairly short order.”

In actuality it only took a few days and on January 4, 2019, Powell began to fast-walk back his policy and communication error.   To continue our fight analogy, Powell reached back for a right haymaker, fired a 10-0 vote December hike (not a single dissent), and followed it up with a left hook hawkish press conference.  It seems he felt he needed to make a statement and put a bloviating, jawboning POTUS in his place. Powell felt his two-punch combination would do the trick. Unfortunately for Jerome Powell, his ill-timed punches spooked the markets and damaged the Fed’s forecasting credibility in the process.

Afterwards, Powell couldn’t stomach the 20% correction and in turn, quickly changed course. The “Powell Put” seems to be alive and well in 2019.

With the Fed effectively removed into their corner, the markets have been free to march back to their 2018 highs.  In our opinion, we currently find ourselves in a rangebound market. If given a correction, we remain in the camp that the US remains a good place to deploy risk. GDP, while slowing in rate of change terms, isn’t falling precipitously.  Reduced regulation and programs such as Opportunity Zones are essentially just getting started and will work towards bringing fresh capital towards blighted areas of the country. Our optimism is tempered by the fact that we are seeing wage inflation start to take hold which is always a late cycle occurrence.  This should keep earnings margins, EPS and market multiples in check generally.

We like to look at many recession indicators and we went over a sampling of 7 of them in our last post.  As it stands today, only 2 of those 7 items have been triggered. Namely, they are the yield curve inversion… 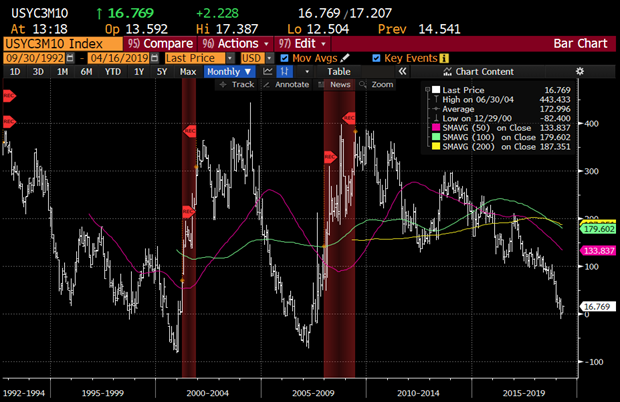 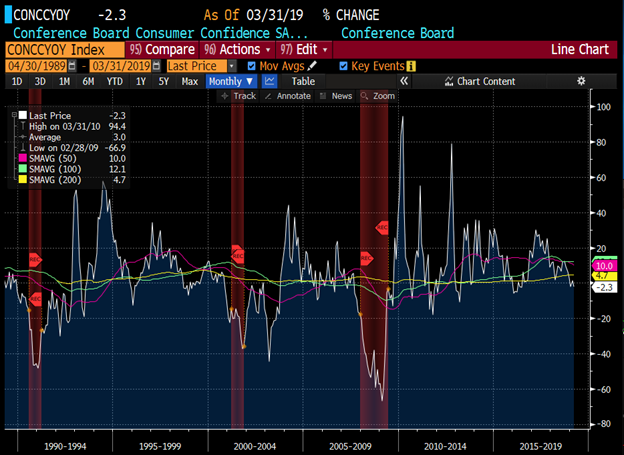 Collectively, we feel comfortable that any recession call right now is premature.  Yield inversion on its own has actually been an equity buy signal historically speaking, and bodes fairly well for the markets’ returns in the next twelve months.

Until we see the following indicators start to signal, we remain only in the recession “watch” camp:

Generally speaking, these have historically given ample lead time before recession fully takes hold of market prices.  We plan to update you as things change moving forward.

For the time being, we see a quiet market where carry is a powerful tool to generate returns.  Importantly, the VIX remains extremely calm and futures positioning has now gone almost a full 2 standard deviations short.   The last time this occurred was a few months ahead of the volatility blowoff in February of 2018. 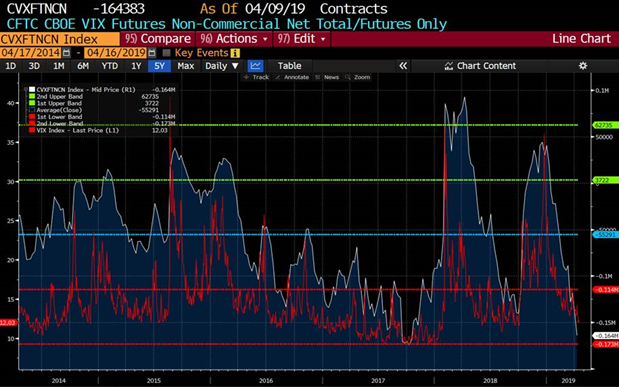 At this time all the players have moved to one side of the boat.  In the scramble to cover and hedge, the VIX shot to 50, killing a handful of short VIX ETF’s in the process.   We’re not calling for a repeat of that experience but we feel it is very notable positioning. Historically it has led to decent corrections ahead.

We have raised cash recently this month and we are looking forward to the next opportunity the markets will give us in 2019.

Past performance may not be indicative of future results, which may be impacted by unforeseen economic events or evolving market conditions. The indices quoted are included for illustrative purposes only, as an index is not a security in which an investment can be made. Certain statements are forward-looking and may not come to pass.