Trump Vs. Powell Update, Round 3

A few months back we updated you on a major battle we felt was going to heat up in the second half of 2018. In Round 1, back in July, we felt the battle between the market forces of the two men’s policies was then even-handed. We cautioned however that it was just the beginning and that “…the momentum is changing.   Powell’s forces are beginning to show signs of overpowering the president’s policies.”

In Round 2, back in October, we made the case that both growth and inflation peaked in Q3, and that if Powell stayed the course, Q4 would face headwinds. We highlighted that Powell’s use of the phrase “We may go past neutral,” was new news, and a real “shot across the bow” to risk assets. We stated, “Given the Fed’s awful track record on modeling the business cycle, growth, as well as inflation, the markets already hold their forecasts in low regard. His stating that they are a ‘long way from neutral’ was received with eye rolls from many players like ourselves that see the business cycle slowing in rate of change terms…”

In our opinion Round 3 was officially kicked off at the December FOMC meeting and the increasingly more important, Q&A session thereafter. Through Chairman Powell’s word choices, he delivered a devastating blow to risk assets and damaged Fed credibility in the process. Let’s explain…

Heading in to the last FOMC decision, there had been a lot of changes to the macroeconomic landscape. CPI had fallen from 2.9% to 2.2%, and PCE had fallen back to 1.8%. Importantly, this figure fell below the Fed’s 2% target. 10yr inflation breakevens had also fallen from 2.18% in October to 1.81%. Oil was also experiencing a historic quarterly price drop and was down 37% heading into the FOMC meeting. 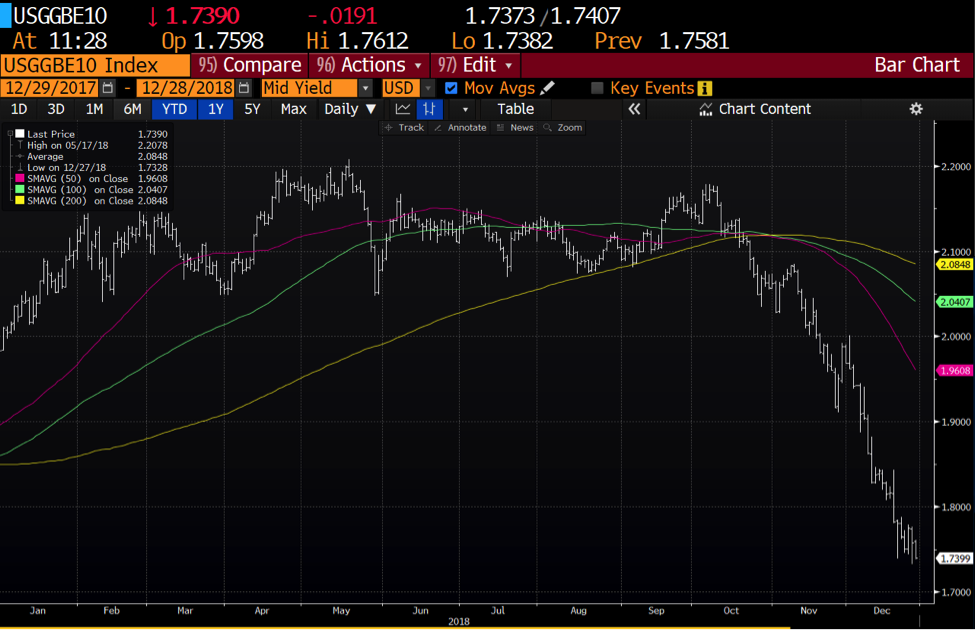 Clearly, inflation had rolled and despite the increased wage pressure resulting from a tight labor market, this was not outweighing the global deflationary pressures. In our opinion, we expected Powell to hike as discussed, but we expected a very dovish press conference. Given their “data-dependent” mantra, we expected them to address the multitude of data that showed a clear slowdown. Instead, the market received no acknowledgement of any of the recent events. To market participants like us, we question what data the Fed is in fact watching.

A few more factors which we are waiting on…

These indicators are statistically significant indicators of potentially starting the recession clock for 12-18 months from the first incidence. If Powell had simply acknowledged the recent weakness and expressed his ability and readiness to stand down if weakness persists, we believe the markets would have held the November trading range. This could have been done in similar fashion to how Janet Yellen paused in 2016. Instead, the recent action taken by the Fed was strikingly similar to when J.P. Trichet of the ECB hiked rates in July, 2011 when growth was already slowing, similar to current conditions in the US.

In the fallout thereafter, Draghi was forced in time to resume cutting rates and eventually adopting a zero-interest rate policy (ZIRP). He also was forced into adopting a “whatever it takes” stance, and bought, on an unprecedent basis, over €100 Billion worth of European corporate paper.

Policy errors have ramifications. They reduce central bank credibility and can blow holes in markets that are increasingly difficult to patch up. When the market is looking to hold the Fed at their word that they are data dependent, not acknowledging data points in general that imply that they are already in fact at the neutral rate is disconcerting.

So, what do we watch for now? Our first read on Q4 GDP comes out January 30th. While consensus for the headline quarter on quarter annualized number is in the mid 2’s, we feel there is risk to the downside, and a potential reading below 2%. Trump will be saying “I told you so,” and this data will be what forces Powell’s hand to walk back his “Autopilot” comment on QT. It will also importantly remove a March hike officially off the table.

For what it’s worth, we should highlight the dramatic move in the Libor curve (chart below) before and after the Powell press conference. It’s notably now pricing in rate cuts in 2020 and assumes Powell reverses course in fairly short order.

Another notable blow from the Fed Chair was the unanimous 10-0 vote in favor of the hike. While many voting members are dovish, they united in force to show strength in the face of external pressures to pause. Not only has Trump become increasingly vocal in scapegoating the Fed for economic weakness, but highly respected figures like Stan Druckenmiller, Paul Tudor Jones, and former Fed Governor Kevin Warsh have expressed sensible cases for not pricking the economy when inflation is already declining. The market took this vote count of 10-0 and simply shook their head, lowering their already depressed assessment of the Fed’s forecasting ability.

To combat this recent market action, Bramshill came into December with a strategically high cash balances in most of their strategies. This helped insulate our performance marginally from the carnage this month, yet we were not immune. Fortunately, the selloff has created some ample opportunity in the US credit asset classes in which we focus. We have been opportunistically putting that cash to work and setting the portfolio up for opportunities in 2019.

Cheers to the New Year!

Past performance may not be indicative of future results, which may be impacted by unforeseen economic events or evolving market conditions. The indices quoted are included for illustrative purposes only, as an index is not a security in which an investment can be made. Certain statements are forward-looking and may not come to pass.