Out of the Crisis Rises the Phoenix! How the Hurricanes Might Negatively Impact Your Bond Portfolio.

Posted by Arthur DeGaetano on September 26, 2017

A lot has happened over the last few weeks. It’s almost enough to make your head spin. In an effort to understand the recent market movements and the overall impacts of the hurricanes, we’ve fielded many questions from RIAs about what has changed and what some of the potential outcomes are as we move forward. The team at Bramshill thought it would be helpful to other advisors if we shared our thoughts as it pertains to your fixed income allocations.

Given the recent spate of hurricanes and natural disasters, RIAs have asked:

In order to understand the potential path forward, let’s quickly recap where we’ve come from. Over the past four months, the Fed gradually raised rates as the economy appeared to be doing OK. However, there has been very little inflation. The result has been a flattening of the yield curve as the bond market sees potential risks that the Fed overshoots and causes the economy to slow down. From a relative yield perspective, Europe has not shifted their QE and rates continued to stay low. On the fiscal front, the Trump agenda has essentially been marked to zero so no growth from an infrastructure standpoint either. The result was falling bond yields.

Now, Mother Nature intervenes in the form of three large hurricanes. Damage estimates are in the $250 bn to $300 bn range; realizing that many of the top insurance companies have said they cannot quantify the damage but are bracing for the worst. This is leading to some interesting turn of events and potential outcomes. The government will have to issue large amounts of debt to fund the recovery and infrastructure rebuild. The reconstruction will likely put further pressure on a tight labor market which raises the chances of faster wage inflation. Municipalities will most likely have to issue debt as well. Additionally, we anticipate an increase in the supply of bonds coming into the market as insurance companies need to fund billions out of their general account portfolios to cover insurance claims.

Politically, we quickly saw an agreement on the debt ceiling debate that was postponed until the end of the year and most likely through March. What's interesting here is that President Trump was able to get a deal done with the Democrats. The Democratic Party for the most part wants to spend money and clearly has no problem issuing debt to do that (debt increased under President Obama). It also sounds like an elimination of the debt limit is a potential outcome. This will be very inflationary. Thinking a few steps ahead, the market is wondering if President Trump and the Democrats will be able to get a tax deal done as well.

From the Fed’s perspective, there's a chance that their normalization of the Fed Funds Rate will be put on hold, as in the short term, these hurricanes can put downward pressure on GDP growth. Part of the curve flattening that we have seen this year was in anticipation of the Fed raising rates too fast and causing a slowdown. That flight to safety now should disappear. It seems to us the bond market is sniffing this out as 10 year interest rates have increased 15 basis points over the past week. Combine all of this with the recent stronger economic and inflation numbers out of Europe and we could see the ECB start to unwind QE. This will pressure U.S. bonds as well.

Looking out, the team at Bramshill sees much higher interest rates and a steeper yield curve. We believe that view is being confirmed by the rally in financial stocks. Stock markets are rallying to new highs as well and in our opinion, this is reflective of the future infrastructure rebuild and construction as well as a potential agreement on policy initiatives, especially with regards to taxes. Both are of these outcomes could be negatives for a fixed income portfolio. While these notes are just our observations from recent market reactions, the potential outcomes are worthy for consideration as they relate to your fixed income allocations.

INTERESTED IN MORE BRAMSHILL THOUGHTS?
Watch the replay of our 2017 q2 webinar here: 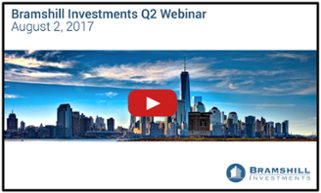 This commentary is provided by Bramshill Investments, LLC for informational purposes only and may contain information that is not suitable for all investors. Certain views and opinions expressed herein are forward-looking and may not come to pass. Investing involves risk, including the potential loss of principal. Past performance may not be indicative of future results, which are subject to various market and economic factors. No statement is to be construed as an offer to sell or a solicitation of an offer to buy securities, or the rendering of personalized investment advice.